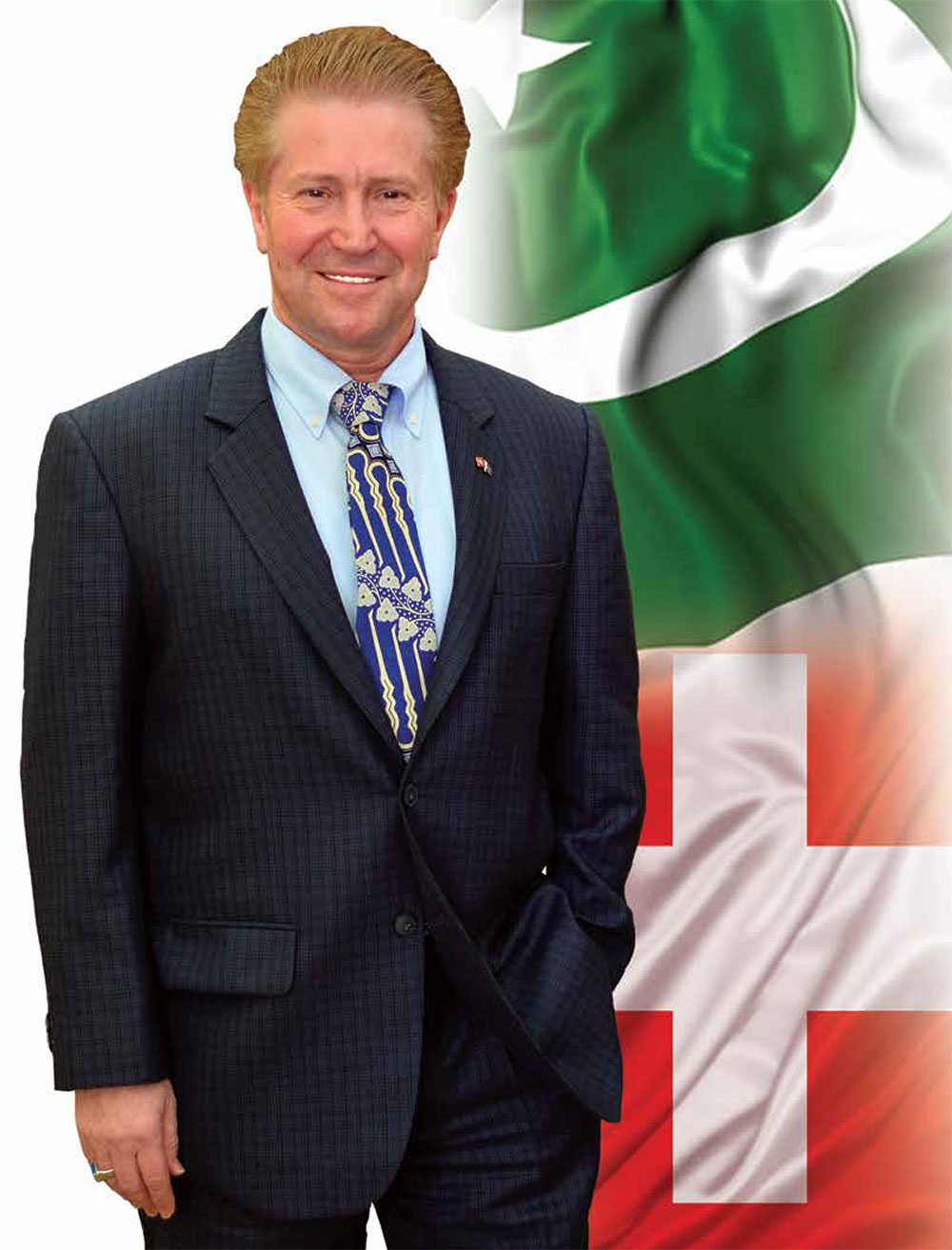 Luminary: How did you start your journey?
Mr. Emil Wyss: I grew up in a small village in the heart of Switzerland. My father was a farmer and my mother immigrated after the 2nd World War to Switzerland. She not only found work but met my father and they were married for 63 years. In my childhood, I learned how to milk cows, work in our forest, and to swim in a river nearby.

After my education and some years of professional life, I entered the Swiss Department of Foreign Affairs at the age of 30. My rst postings were in Prague (former Czechoslovakia), the Swiss Embassy in London, and the Swiss Observer Mission to United Nations (UN) in New York. Switzerland became a full member of the UN in 2002 after a popular vote. I then worked at the head office in Berne for 5 years in the Political Affairs Division before taking on my new assignment as Consul at Swissnex Boston. Swissnex Boston serves as a Science Consulate and connects the greater Boston Area and its world class institutions like Harvard and MIT with Switzerland. My next assignment was at the Swiss Consulate General in Toronto. Before coming to Karachi, I was Head of the U.S. Interest Section in Tehran.

Switzerland entertains excellent bilateral relations with Pakistan since its independence in 1947. Over 20 Swiss companies are present, most of them are headed by Pakistani Managing Directors, and all of them produce excellent results. Swiss Companies provide through direct and indirect employment, food on the table for 1 million Pakistanis every day. Switzerland is consistent among the 5 biggest foreign direct investors.

Luminary: Switzerland exports to Pakistan in large numbers. What are your thoughts on it?
Mr. Emil Wyss: Switzerland exports for about $300 million to and imports for about $100 million from Pakistan. Besides products like watches, dyes, chemicals and others, Switzerland is an important provider of high-quality textile machines. Pakistan uses these ingredients and machines to manufacture products for its markets at home and abroad. These numbers are expected to increase in the coming five years as a result of the improvement in the law and order situation and the beginning boom in construction and real estate. The homicide rate in Karachi fell to 4 per 100,000 in 2015, while the world average is 6 per 100,000. The road to even higher security will be bumpy, but the latest numbers are very encouraging.

Luminary: How did you nd people in Pakistan?
Mr. Emil Wyss: When I was oered to become Consul General in Karachi, one of the biggest cities in the world, I ew to Karachi and explored the city with a local travel guide. I immediately liked the colors and energy of this city. I traveled around by taxi, rickshaw, by foot, by boat, and enjoyed the food in tiny street restaurants.

All the predecessors I contacted consider their stay in bustling Karachi a highlight in their career and mentioned the unmatched hospitality of the Pakistani people. The level of Corporate Social Responsibility activities by companies and individuals is outstanding; fruits, vegetable, and seafood are abundant and delicious; Pakistan textiles are world famous and its Denim products are exported to countries all over the world.

On the 7th of June 2014 I had to travel from Karachi for another week to Tehran to make the handover to my successor. As you remember, the airport was attacked on the 8th, of June 2014 and only the heroic eorts of the Airport Security Forces prevented an ever greater incident. I then decided to plan a Pakistan-Switzerland Friendship Exhibition at both the domestic and international terminal. The exhibition opened on May 29, 2015 and was open for 100 days and night. I visited the airport every single night between midnight and 4 am during this opening period and interacted with travelers, facilitators, and the very helpful airport employees. Over 400,000 local and international travelers experienced a colorful and cheerful airport Karachi. The number of followers on our Facebook page Swiss Consulate-Karachi increased from 7,000 to more than 130,000.

Over the last 2 years, I visited many social institutions in all parts of the city. Whether in an orphanage, a Thalassemia center, a home for the deaf, elderly, or children with cerebral palsy, Pakistanis always welcome me with open arms and I return to the oce fully energized. One of the many highlights in this eld was an Iftar Dinner for the blind at the Swiss residence.

Luminary: What are the gray areas you noticed in the system?
Mr. Emil Wyss: Like everywhere in the world, there are challenges to overcome and opportunities to seize. Education, good governance, eradication of corruption, employment opportunities for the youth, providing basic health services, and the empowerment of the less privileged are elds with large potential for improvement. The promotion of vocational training is another area where millions of young Pakistanis could nd decent employment at home and abroad. Switzerland’s vocational training programs oer the possibility to choose from 230 professions and the very high-quality level of vocational training is one of Switzerland’s secret of being the most competitive and most innovative country in the world. In fact, 75% of the Switzerland’s youth chose this path and many of them become successful entrepreneurs. The Swiss-Pakistan Training Institute in Karachi, now 50 years old, still produces every year many hundred graduates.

Luminary: Any message to young entrepreneurs and would you like to guide them how and when one should start their own business?
Mr. Emil Wyss: As a matter of fact there is no specic age limit to start a business. We have the example of very young people starting becoming well-known entrepreneurs. Similarly, people like the founder of Kentucky Fried Chicken started his adventure at the age of 60 and KFC became a world brand. The best might be to start at a young age and to include experienced people in your venture. To encourage entrepreneurship, universities can include this subject from idea, setup, to nancing in their curriculum.

It is always a pleasure for me to deliver speeches at universities and to interact with Pakistan’s bright students. They can compete with the best in the world. Just recently, Szabist University won the rst prize at the famous Model United Nations Conference at Harvard University in Boston. This came to no surprise to me because I had the pleasure of attending Szabist’s UN Model Conference in Karachi a few weeks earlier. LUMS students won another rst prize at an International Conference in Washington D.C. In March 2016, I delivered a lecture at LUMS in Lahore was impressed by its students, faculty and campus. It is good to see that an increasing number of Pakistan’s upcoming IT specialists are becoming entrepreneurs.

Pakistan with a population of 200 million exported in 2015 good and services for $23 billion. Considering the availability of all kind of natural resources, the low-cost labor force, the geographic location with important ports and large neighboring countries, this number is not satisfactory. Switzerland, a landlocked country with just 8 million people, without natural resources and a mean salary of $6,000 per month, exported goods and services for an amount $203 billion in 2015. Over 60% of Switzerland’s export goes to the European Union countries; excellent relations with neighbors are of utmost importance to keep exports at the highest level possible.

Luminary: What do you think about women empowerment in Pakistan? As recent research proves progressive and developed economies have more working women.
Mr. Emil Wyss: Women play a vital role in the development of any country. Many Pakistani women have a high level of education and do nally and unfortunately not enter the workforce. It is good to see that more and more companies are now actively trying to include women in leading positions or to empower them through company intern seminars. The Swiss Consulate General although organized women empowerment events in collaboration with LADIES FUND.

Switzerland’s women got their right to vote in 1991 only. Nevertheless, progress has been made and five out of the last 10 Presidents of the Swiss Confederation are women.

Luminary: What are your future plans as Consul General of Switzerland in Karachi?
Mr. Emil Wyss: The goal will be to bring as many people, business persons, company representatives to Pakistan. They come here as tourist or business person first and often go back as ambassadors of Pakistan. Recently we have signed a MoU between the Swiss Business Council and Sindh Board of Investment and another MoU between the Swiss Business Council with the Punjab Board of Investment and Trade. As a direct result, Swiss Company SIKA will invest $4 million in a new plant. The Textile Institute of Pakistan signed a few weeks back a MoU with the Swiss Textile College in Zurich. The Swiss Business Council organized five fact finding missions for Swiss companies in Pakistan and new agreements have been signed. And it goes both ways: a well-known Pakistani company is investing $6 million in a new factory in Switzerland.