THE SCIENCE BEHIND THE SAMSUNG GALAXY NOTE 7’S BATTERY FIRES 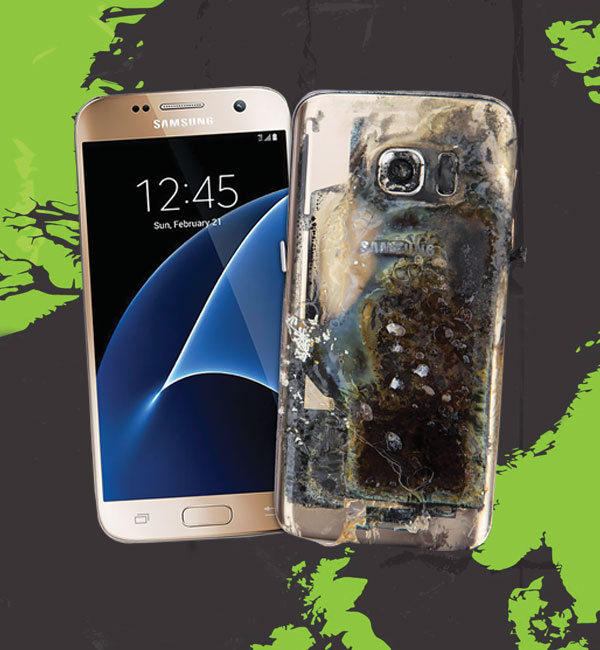 The Samsung Galaxy Note 7 is suffering the same fate as countless hover boards — there are reports that some phones have been bursting into flames, prompting Samsung is issue a recall and the U.S. Federal Aviation Administration to strongly discourage passengers from carrying the device on planes, news sources report.

Why is this smartphone such a fire hazard? The answer has to do with its lithium-ion battery, a common power source that isn’t just used in cellphones but also in computers, power tools and toys.

Lithium, the third element on the period table, is a silver-white metal that can catch fire when exposed to oxygen or water.

But in 1991, Sony Corp. commercialized a way to safely use the ions, mainly by keeping the lithium ions in a suspension or chemical so that it isn’t pure lithium.

Well-made electronics have safety measures built into their lithium-ion batteries, but faulty ones with poorly made electric circuitry can meet with fiery ends.

For instance, faulty batteries can be overcharged. Well-made batteries will stop charging automatically once they’re full, but that’s not always the case for faulty batteries. If left plugged in for too long, the lithium ions can collect in one spot and be deposited as metallic lithium within the battery. Also, heat from the overcharging can cause oxygen bubbles within the gel, which are highly reactive with metallic lithium.

Likewise, defective lithium-ion batteries can also be over-discharged, meaning they don’t shut off when the power is too low, which can also lead to fires.

It’s unclear exactly what’s causing the problem in some Galaxy Note 7 devices, but one user showcased the result on YouTube after he removed the phone from its official Samsung charger.

As of Sept. 1, Samsung is aware of 35 cases globally of lithium-ion battery malfunction, the company said in a statement.

“In response to recently reported cases of the new Galaxy Note7, we conducted a thorough investigation and found a battery cell issue,” the company said in the statement. The company said it would temporarily halt sales of the device, and that it would replace current Galaxy Note7 smartphones with newer, safer models in the coming weeks, Samsung added.

In the meantime, the FAA and many airlines took action, saying that it “strongly advises passengers not to turn on or charge these devices on board aircraft and not to stow them in any checked baggage,” according to a statement.