EXERCISE can have Negative Effects ON HEART 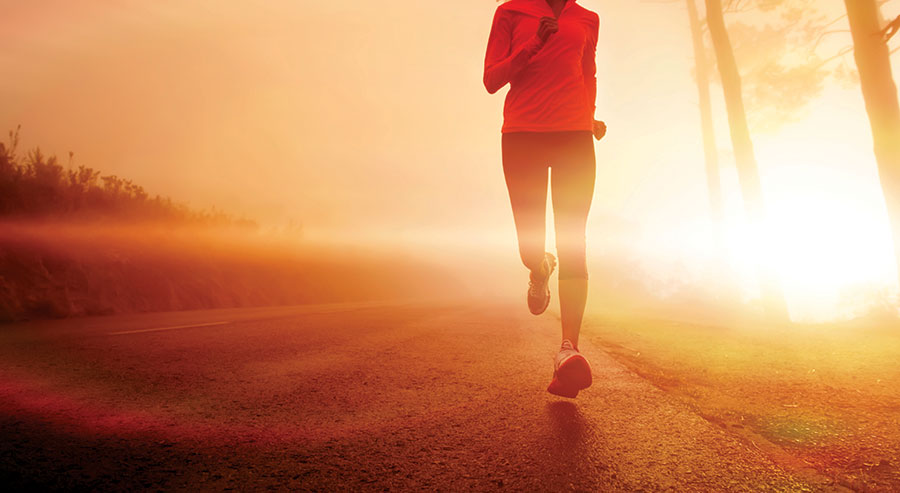 Pushing your body to the max day after day can stress your heart and raise your risk for a type of abnormal heart rhythm called atrial fibrillation, or A-b, which ultimately can lead to heart failure or a stroke, according to the review, which analyzed 12 studies on A-b in athletes and endurance runners. But before you fall o your sofa laughing at the ambitious among us, note that not exercising at all is far worse for your heart than overdoing it, doctors emphasize. As in so many aspects of life, moderation is key. Myriad studies have established the heart-health benets of moderate- and vigorous-intensity exercise. Conversely, not getting your blood pumping can lead to
clogged arteries and heart disease.

Both of these types of exercise lower the risk of atrial fibrillation. In people with A-b, blood can pool in the atria, the two “top” chambers of the heart that take in blood and pump it downward to the left and right ventricles. This incomplete pumping can stress the entire cardiovascular system. The most common causes for an A-b are high blood pressure and heart disease affecting any of the four heart valves.

Extreme exercise is loosely defined as several hours of vigorous exercise nearly every day — the type of exercise expected from elite athletes and endurance athletes. This much exercise could cause atrial fibrillation, according to Dr. André La Gerche, a sports cardiologist at the Baker IDI Heart and Diabetes Institute in Melbourne, Australia, and the author of the new review study. All available drug therapies aimed at treating A-b have a dose-response relationship in which benefits diminish at high doses and the risks of adverse events increase, La Gerche said. So, then, it is logical to assume there may also be a dose-response relationship between exercise and A-b — and that “overdosing” on exercise may be toxic to the heart, he said.

Research that questions the benets of exercise is often criticized, La Gerche said. The new paper explores “the often questionable, incomplete and controversial science behind the emerging concern that high levels of intense exercise may be associated with some adverse health effects,” he said. La Gerche’s earlier research, published in 2011 with colleague Guido Claessen of the University of Leuven in Belgium, found that patients who were admitted to the University of Leuven Hospital with an atrial fibrillation of unknown cause — that is, not due to hypertension, heart disease, obesity or diabetes — were four times more likely than the general population to have engaged in endurance sports. 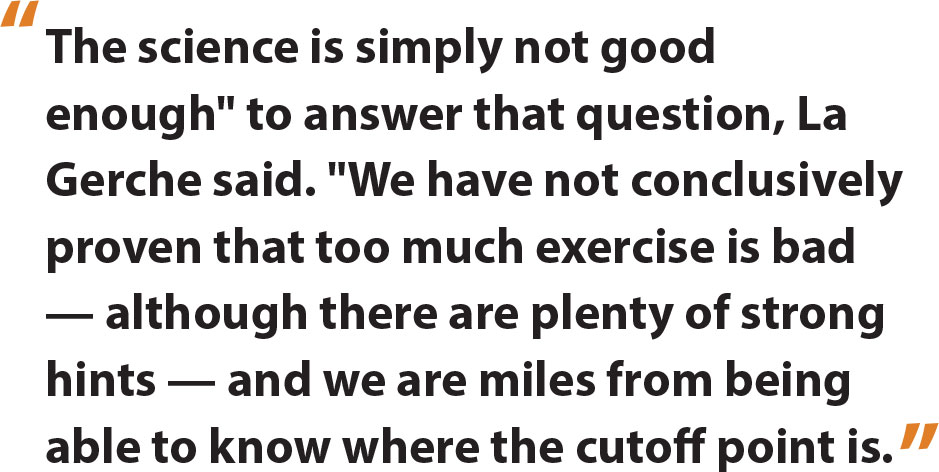 A similar study by researchers from Denmark, published in 2009, found that athletes were about 5.3 times more likely to develop A-b than were matched nonathletic participants (used as a control group for comparison). La Gerche highlighted numerous studies showing the risk of developing atrial fibrillation by midlife among athletes and endurance runners.

So, how much exercise is too much?
La Gerche instead noted that studies have shown how the risk of death over a given period sharply decreases as exercise frequency and intensity increases but that these benefits begin to level o at an intensity that represents only approximately 50 percent of a well-trained athlete’s capacity.

Other researchers say the heart benefits of extreme exercise outweigh the risks. Dr. Fabian Sanchis-Gomar, of the October 12 Research Institute in Madrid, has found that the benefits of high levels of intense exercise include lower blood pressure, lower body fat, a better ratio of HDL to LDL (“good” cholesterol compared to “bad”), improved insulin sensitivity and an overall lower risk of death over a certain time period.