CPEC LEADING PAKISTAN INTO A NEW ERA OF ECONOMIC GLOBALIZATION 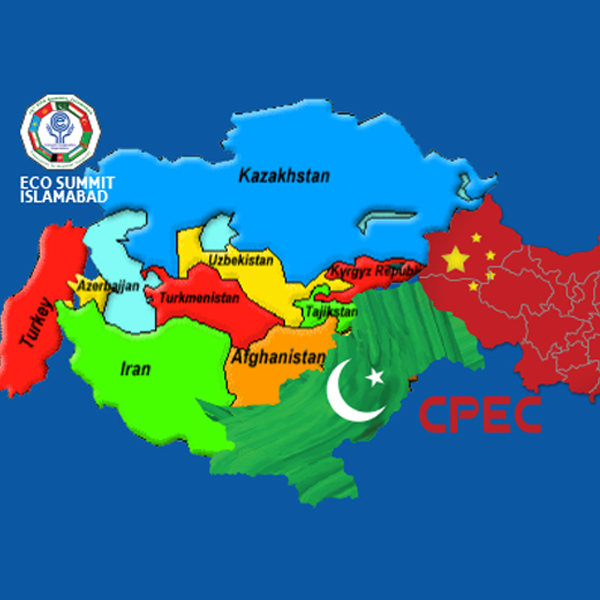 Pakistan government’s seamless execution of the 13th ECO Summit is a success of its foreign policy. China-Pakistan relationship has been lifted to the all-weather strategic cooperative partnership and is faced with the new important opportunity. The country has averted immense diplomatic pressure from some states that have been uncooperative toward the China-Pakistan Economic Corridor (CPEC) but has diligently gathered enough interest from regional states to overrule it.

It is suitably located at the junction of South Asia, West Asia, and Central Asia, situating Pakistan on an important route between the energy-rich countries of the West and Central Asia and those in South Asia with great appetence for energy. The three seaports at Karachi, Port Qasim and Gwadar provide the shortest routes for Afghanistan, China, Kazakhstan, Kyrgyzstan, Tajikistan, Turkmenistan, and Uzbekistan for linking them to the rest of the world. All the countries in the region would greatly benefit by cutting their trade and transportation costs by transiting through Pakistan. With their rich history of social and economic ties over generations, the ECO member states are marching towards mutual connectivity with CPEC providing contextual support. The member states, especially Iran and Tajikistan, are working towards developing linkages with CPEC, and have devised extensive plans for trade and energy connectivity with Pakistan.

Regional trade has been an important factor in the economic success of many countries. Despite possessing a great strategic geographical location, Pakistan has yet to leverage fully to its trade advantage. In particular, transit through the new Gwadar Port could bring huge dividends. It is located at the top of the Arabian Sea, approximately 75 km east of Iran‘s border with Pakistan and 400 km from the Strait of Hormuz, which is the only sea passage to the Persian Gulf from the open sea. For China, trade and energy transport from the Persian Gulf and East-African states through Pakistan will reduce a distance of about 15,000 km to just 2,500 km. After the completion of the high-speed rail and road networks across Pakistan, oil tankers from eastern China would reach Gwadar, within 48 hours. The Gwadar Port has the potential to become much more significant compared to Dubai as it can handle larger cargo S-class ships and oil tankers.

The China-Pakistan Economic Corridor (CPEC) a $54 billion portfolio of energy and infrastructure projects – promises to usher in a new era of economic development and growth for Pakistan.CPEC MAP includes almost sixteen projects in Balochistan, eight in Khyber Pakhtunkhwa, thirteen in Sindh and twelve in Punjab. There has been a wrong perception that Punjab is benefiting more with CPEC projects the Projects map show clearly the situation. We as a nation need to change the mindset as the whole project is overall contributing to Pakistan economic development no matter which province gets what the benefits will return back to the whole country.

China-Pakistan Economic Corridor (CPEC) is an opportunity for an economic upturn to Pakistan. The law and order, political instability, terrorism, lack of planning and lack of implementation of policies are the major challenges being faced by the economy of the country. The trade volume of CPEC expected to reach 2.5 trillion dollars in the next decade. But the government must provide security to foreign investors. The government must ensure the stability of Pakistan’s economic indicators to attract FDI, and streamline the institutional structures to facilitate its implementation on the ground.

Pakistan is the richest state in terms of the abundance of natural resources. The country has multiple resource reserves, perfect geographic location and significant workforce, all of this can lead it towards economic growth.  To improve its economic development, the country has initiated the CPEC project. CPEC will boost the economy of the two countries. This project has already alerted a few developed countries. Some powerful nations tried to sabotage the CPEC project, but fortunately, they failed to harm it. This project is the largest foreign investment that has ever been made by any foreign country in Pakistan. No doubt, the project is a gift for the country, which should make the most out of this project. Many CPEC projects are going to end the energy and electricity crises of the country. This process can lead the country to prosperity. We need to plan to ensure maximisation of benefits from CPEC to the economy. What are the weaknesses and deficiencies in the existing set-up we need to overcome?

Industrial Cooperation: There is a big question mark in many minds that how will government secure the benefits of Pakistani Businessmen so they are not eaten by Chinese? Ironically, industrial cooperation is one area where Pakistan seems least prepared. While policymakers are overly optimistic on CPEC and its potential benefits, local manufacturers, chambers, and industry associations appear to be seriously concerned about their future.

The textile industry, for instance, fears the glut of textile goods from Xinjiang to create serious competition in future. There is also a need to look at Pakistan’s own industrial clusters and assess how they can benefit by CPEC through potentially accessing Chinese markets and beyond. Some industrialists, especially in the textile industry, are skeptical towards the competition from Chinese goods. This concern is primarily due to technology-averse nature of some industrialists that do not plan to enhance their technique to stay competitive by improving their products, while others think that Chinese industry, by its sheer size, will empty the markets of raw materials, and always deliver products at a cheaper rate. To counter such a possibility, the government must formulate a well thought-out industrial policy and place a transit fee on every item crossing the borders, which shall help put a check on Chinese goods flooding Pakistani market, depriving it of raw material, or placing products at too low a cost for local industry to survive against.

Going forward, the government should adopt a three-pronged strategy for industrial cooperation, focusing on expansion and upgrading of existing industries; deepening the industrial base aiming at creating better forward and backwards linkages; and industrial diversification, nurturing new industries leading towards sophistication of export base.

Pakistan must reassess its current protectionist policies that are stifling its economy and undermining the ability to compete in the global market and allow domestic industries and infrastructure to operate in an environment maximising its potential. While some of these concerns may be well founded, these industries need to realise that openness and globalisation have its own perils and sooner or later they would have to be competitive to withstand any such global threats. But for the government, it is also equally important to think through its own priorities and further the national agenda through a well-articulated industrial policy.

The interest of foreign entities: Moreover, issues are not just limited to Pakistani business community but as well the foreign entities doing business here are also concerned about the unhealthy competition in terms of unfair trade policies which will lead them to the uneven and less conducive business environment. With regard to global trade, Pakistan must restructure its taxation policies and look for ways to integrate available comparative advantages within global supply chains

Human Resource: The third aspects if how do we plan to ensure maximisation of benefits to the economy? Are we ready to exploit the full potential? There is still a huge gap in terms of identifying and forecasting the specific human resources needs to cater the ongoing and future projects of CPEC. Government, Academia and vocational training institutes have to look at this more seriously.

Environmental Safeguards:  Furthermore, for any industries relocating to Pakistan, there should be an effective environmental safeguards regime in place. On the environmental front, experts fear that an open-gate policy towards China may bring in dirty industries to Pakistan, resulting in environmental degradation. For example, talking about the new coal power plants under CPEC and the technologies and machinery which will be used to in it are they environment-friendly?

Reservation on National stability and Integrity: Many people are resembling the Chinese penetration with east India company coming into subcontinent although Chinese are more sophisticated, but the concern is serious since many important public sector entities have been leased to Chinese recently.  A couple of Chinese entrepreneurs has already snapped up two major deals the Karachi Electricity Supply Corporation and 40 per cent of Pakistan Stock Exchange. Quoting some executives of Pakistan’s biggest firms a foreign news agency has reported that Chinese companies were looking at the cement, steel, energy and textile sectors, the four which make up the backbone of Pakistan’s $270 billion economy. Meanwhile, China’s steel giant Baosteel Group in talks over a 30-year lease for the state-run Pakistan steel Mills.

So the penetration level lead us to rethink on future risks and reservation unless the government plans and design to make this cooperation safe and controlled keeping in mind China is our big strong neighbour. How the government is planning to make this joint venture safe in terms of our integrity and solidarity interests until now is just a question mark unless policy makers show some openness share information in this regard.