A LEGEND LARGER THAN LIFE 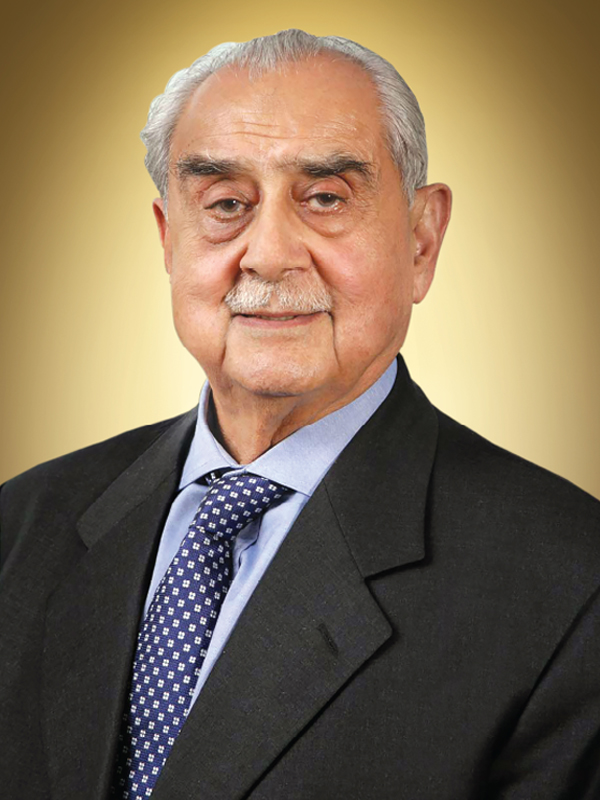 Syed Babar Ali started his education at the Sacred Heart Convent in Lahore and began attending Aitchison College in 1934. He obtained his High School Certificate from Aitchison and went on to earn a Bachelor of Science from the Government College of Lahore in 1945. In December of 1946, he took off for the United States, where he received admission to a master’s program at the University of Michigan in Ann Arbor. In December 1947 he returned to Lahore to carry on with the family business. After 11 years in the family business, he had an idea for which he received much support from his family.

He travelled to Sweden and started a joint venture with Akerlund & Rausing, a leading family run packaging company that later began Tetra Pak. As an entrepreneur and industrialist, Syed Babar Ali envisioned and set up Packages Limited (Pakistan’s largest paper & board mill), Milkpak Limited–now Nestlé Pakistan Limited (the largest food processing company in Pakistan); Tetra Pak Pakistan Limited, IGI Insurance Company Limited, Tri-Pack Films Limited, and IGI Investment Bank. He is Chairman of Sanofi-Aventis Pakistan, Coca-Cola Pakistan and Advisor to Packages Group of Companies. He believes in the joint venture philosophy and most of his businesses are joint ventures with major multinationals. In addition to business developments, Syed Babar Ali has made amazing social impacts in Pakistan via education and

philanthropy. He had the opportunity later to attend Harvard Business School in 1973, where he really appreciated the education he received and was inspired to bring the same knowledge to students in Pakistan. This inspiration led to the establishment of Pakistan’s premier Lahore University of Management Sciences in 1985, where he serves as the first Pro-Chancellor. He later founded the Ali Institute of Education in 1992 for the training of primary and secondary school teachers. He also founded an art school that focuses on preserving the ancient and lost practice of miniature painting, the NAQSH School of Art, appropriately located in the ancient walled city. He is a member of the Board of the following important educational institutions of Lahore: Aitchison College, Kinnaird College, and Lahore School of Economics. He is also a Founding Member of the South Asia Initiative of Harvard University and the Co-Chair of South Asia Centre for Policy Studies currently based in Nepal. He served as Pakistan’s Minister of Finance, Economic Affairs & Planning in 1993.

He promoted the cause of the World Wide Fund for Nature (earlier World Wildlife Fund) where he served in various capacities, both in Pakistan and internationally, from 1972 to 1996. He was International President of WWF from 1996 to 1999 succeeding HRH Prince Philip, the Duke of Edinburgh. He is now Vice President Emeritus, WWF International, and President Emeritus WWF-Pakistan.

He set up Babar Ali Foundation in 1985. The Foundation gives about a million dollars a year primarily for education and health in Pakistan. He is Chairman of Gurmani Foundation and Syed Maratib Ali Religious & Charitable Trust Society. He is also a member of Layton Rehmatullah Benevolent Trust Karachi and Shalamar Hospital Lahore.

He received honours and awards from the Government of Sweden, the Netherlands, an OBE from Britain (1997), and was awarded an Honorary Doctorate Degree of Laws from McGill University, Montreal, Canada (1997).

LUMINARY: As an educational activist and reformist you led the establishment of LUMS which is now Pakistan’s premier management education institution. How do you look at the current situation of education in Pakistan? And how you see the industry-academia gap?

Syed Babar Ali: Education is the most important aspect of any nation’s survival today.  It determines the future of a nation.

While studying business management at Harvard Business School in 1973, I realised the need of a well-established business university in Pakistan.  LUMS was founded in 1985 and now accommodates 4,000 students.

Pakistan lags behind in our education goals, problems of access, quality, infrastructure, and inequality of opportunity, remain endemic.  Sadly, education is not on the radar of the government. They talk about education but when it comes to funding and putting the right people in it, it’s not on their priority list. The Secretary Education and the Minister of Education are not the strongest members of the Cabinet.

There is a whole multiplication of campuses of established universities all over Pakistan but it is kind of a proliferation rather than setting standards of quality education.  The foundation of a good national education system starts at the primary level, builds into and tertiary and then culminates into higher education.  The whole chain is suffering.  The private sector has stepped in at all stages because there is a good enough gap for exploitation and money is being made.  The common person is willing to sacrifice his comforts and quality of life by investing in the education of his children but sadly he is not getting what he is paying for.

The budget for education has to be substantially increased from what is being allocated at the moment.

Luminary: How do you see the role of businesses and industry in this regard?

Syed Babar Ali: When Pakistan came into being, there was no medium to large scale industry.  The area which is Pakistan today was producing food and soldiers for India, alongside some cottage industry.  After Partition, the government took a proactive role in promoting industry primarily consumer goods industry to replace whatever was being imported.  There was a transformation from imports substitution to producing goods which could be exported primarily based on Pakistani raw material, cotton, yarn and textile made-ups, and more recently garments.  With the openness for imports and lower tariff, imported goods have come in and compete with what we produce.  This is not a bad thing as we have to be more competitive and the consumer has to get a better value for money.   Having said that there is no holistic kind of effort on the part of the government to enter into arrangements with other countries on non-tariffs, knowing fully well that these countries protect what is coming in their own countries.  In this context, there are a large number of goods coming into Pakistan with no duties and tariffs, resultantly the profitability of the industry across the board in Pakistan has been marginalised.

The tax regime here is also lopsided.  Instead of enlarging the tax net, the Government is going after current taxpayers in the industry to pay more.  Less than a fraction of the population is paying taxes and the industry is struggling for its survival.

There is a shortage of gas, power, lack of law and order, and everyone has to have his own guard to protect his premises and above all the tax people hounding them.  With this kind of prevalent practices, one cannot expect the industry to play an active part in improving the quality of education in the country, nevertheless, they do contribute.

Luminary: Whatever academia is producing is utilised by the industry. How is an industry to be better fed with quality human resources?

Syed Babar Ali: LUMS came into being with the same thought and mindset.  Many of our graduates have climbed the ladder of phenomenal success in the industry on the management side but a fair amount of people have gone into starting their own businesses and thus creating new jobs.

In any case, we need better quality education because you don’t need an army of less literate people. If you can read a newspaper, you are called literate in Pakistan. This is not enough, people should be able to think, analyse and take decisions on the basis of knowledge.

We need universities with a focus on research, where new knowledge is being created.  It ultimately reflects in the development of the country.  You see so many accidents in Railways, air crashes, it all reflects on the lack of discipline and lack of proper education.  Millions are dying due to lack of medicine and proper medical facilities. There is a whole lack of quality control across the board, contamination in water and milk are a major life threatening areas as well.

LUMINARY: How do you look at China-Pakistan Economic Corridor (CPEC)? As most people are resembling them as a new east India company in Pakistan.

Syed Babar Ali: Chinese are much more sophisticated and wise as compared to the British.  Chinese intentions are looking more sophisticated and they want Pakistan to be self-sustaining and standing on its feet.  This is due to Pakistan geographical importance.  I am not a politician so I am not in a position to comment on this politically but I welcome Chinese investment in Pakistan.  The government should also make sure that Chinese investment doesn’t wipe out the Pakistani businessman; the local manufacturers, Chambers and Industry Associations appear to be seriously concerned about their future.  While negotiating with Chinese, there should be a fair amount of participatory mechanism for local businesses.

LUMINARY: What initiatives can we take to improve this situation?

Syed Babar Ali: I am ninety years old and still work most of my available time. Why can’t we set our priorities straight inculcate a commitment to quality; whatever you do you should do it well and that’s my message to everybody.